As Blueprint predicted at the start of the year, 2022 has been an eventful one for intelligent automation and RPA. Now as we near the end of 2022, it’s an opportunity to look back at the year in automation.

Here are the seven most noteworthy trends and biggest events in 2022 for all things automation:

#1 - The Rise of Microsoft Power Automate

Considering Microsoft’s pedigree and history, it shouldn’t come as much of a surprise that Microsoft Power Automate continued its rapid ascent as a leader in the intelligent automation market segment.

For another consecutive year, Microsoft made a leap in Gartner’s Magic Quadrant for Robotic Process Automation, establishing itself as a leader in the analyst’s category by the same name. There are several reasons behind Microsoft’s meteoric rise in the automation space. Primarily, Power Automate’s rapid evolution to support automation at scale and its ease of use that empowers a true citizen developer approach.

It also offers both UI and API automation with pre-built connectors, further simplifying the design and delivery of automated processes. An AI Builder capability delivers intelligent automation with AI-enhanced automated workflows and the strategic alignment and compatibility with the rest of the Microsoft stack are difficult to ignore.

Moving to Microsoft Power Automate also ensures an organization is well-positioned to expand their automation portfolio beyond RPA to the entire Power Platform. This enables companies to broaden process automation to business applications/apps with PowerApps and intelligent virtual agents using Power Virtual Agent for example.

Arguably the biggest benefit Microsoft Power Automate delivers is its ability to reduce the total cost of ownership (TCO) from both a licensing and infrastructure standpoint, making it an incredibly cost-effective and competitive option for organizations looking to reduce costs. 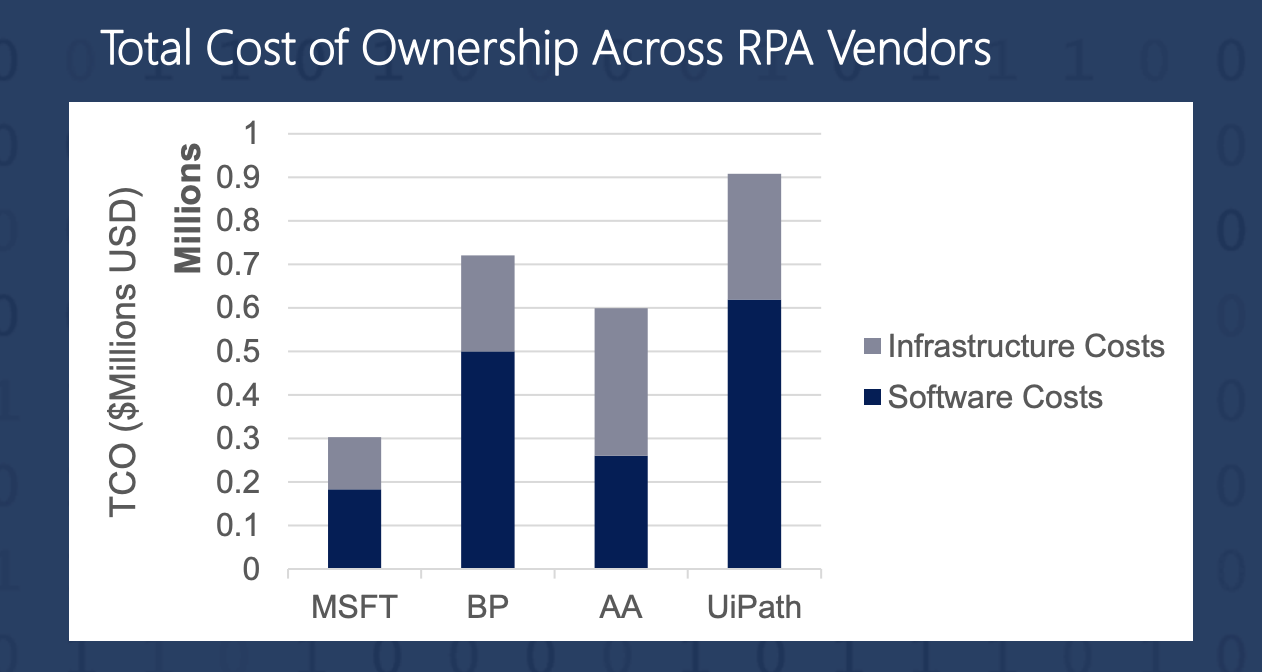 Leading to the next trend that dominated 2022 in automation, Microsoft’s pricing structures and reduction in TCO made it the preferred option for companies looking to migrate their automation estates to another intelligent automation solution, according to research Blueprint performed this past year.

As automation programs have matured, so have their needs, however, the legacy tools on which they started their RPA journeys are falling short. Faced with inflating costs, a high degree of technical complexity that demands too much from IT resources, and heavy maintenance and support overhead, more and more organizations are looking to next-generation intelligent automation solutions like Microsoft Power Automate to solve these challenges.

According to Blueprint research, of the surveyed organizations that reported they had already migrated their automation estates to another RPA tool, the biggest benefit they reported from switching was enabling better capabilities and features. 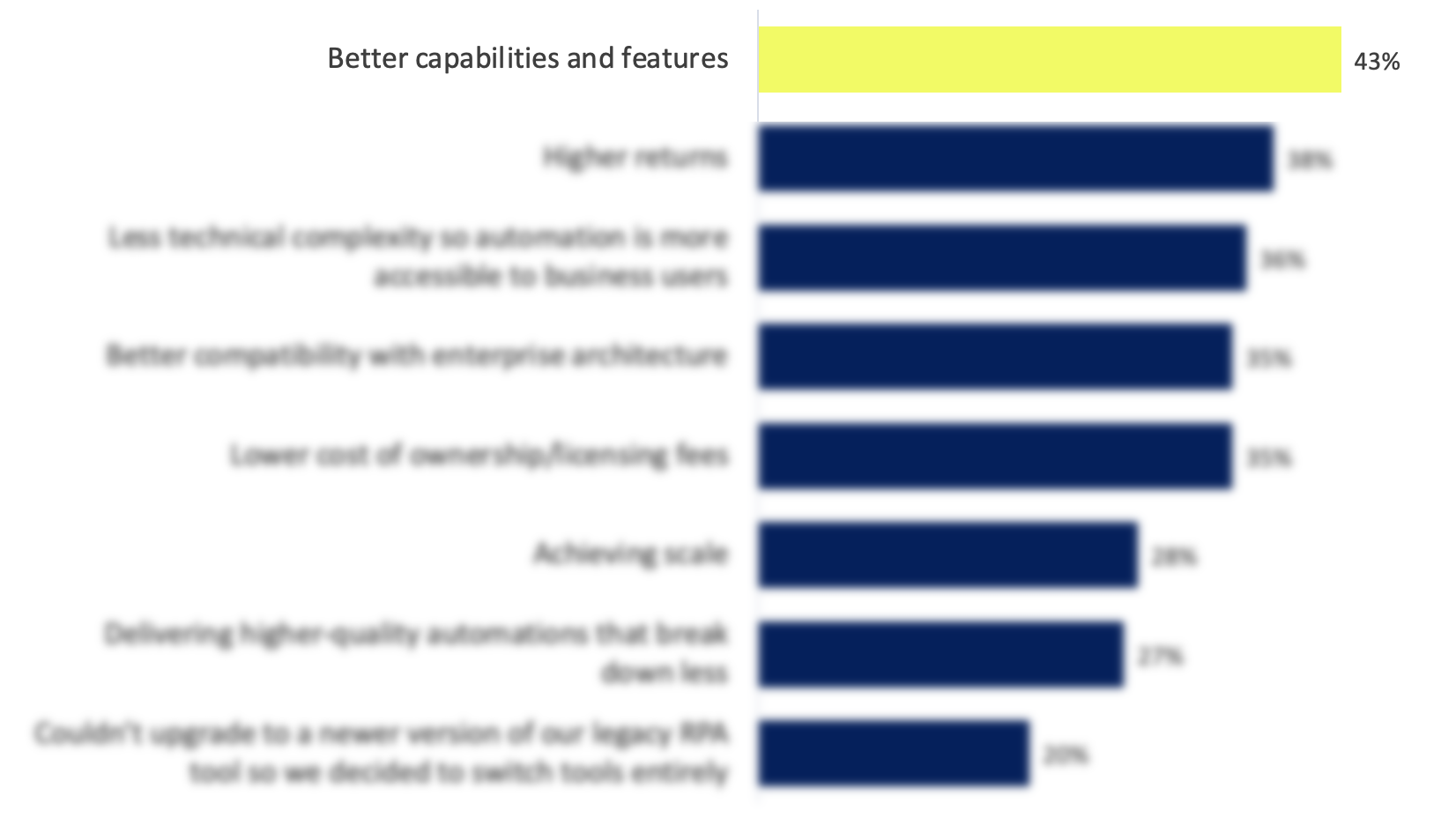 Clearly what has driven so many automation migrations to date has been a desire to scale automation, enable intelligent automation, and reduce costs—all aspects that seemingly can’t be accomplished with legacy RPA tools.

What’s also driving competitive account transitions to the likes of Microsoft Power Automate and Automation Anywhere’s A360 is cloud readiness as automation looks to also move beyond on-premises and the client-side to the cloud and web-based interfaces.

#3 - The Emergence of Automation in the Cloud

One reason Microsoft and Automation Anywhere are taking the lion’s share of migrating automation estates from their competitors is the fact that they are both cloud-native, low-code intelligent automation platforms.

There has been some hesitation for larger organizations to move their automation practice to the cloud, however, after realizing all the benefits of moving computing to the cloud, the motivation to take automation to the same place has only ramped up.

According to Automation Anywhere’s Now and Next report, 68% of all their surveyed customers have chosen cloud automation. The same report also indicated that small- to medium-sized businesses make up the majority of companies that have made the switch to the cloud, indicating large enterprises’ caution to do the same, however, it’s only a matter of time before they make the switch as well.

The benefits – such as quicker implementation times, reduced costs, increased ease of use, and hands-free security and maintenance – are simply too strong to ignore.

Download the whitepaper: Cloud Automation vs On-Premises: Which Should you Choose?

Any time a solution provider upgrades their platform there are going to be hiccups. However, Automation Anywhere’s A360 has overcome many of the hurdles it previously faced. 2022 saw the RPA leader jump out of the gate and gain new traction with their low-code, cloud-native, and web-based platform. Part of this growth can be attributed to Automation Anywhere’s development of a seamless migration path from their legacy Enterprise 11 offering to Automation 360.

A360 was built from the ground up and designed to run on cloud infrastructure, offering a remarkably different platform compared to Automation Anywhere’s Enterprise 10 and 11 offerings. Their new, next-generation intelligent automation solution leverages all the learning amassed from their legacy solution to deliver a platform where all business users can design and deliver automated processes.

Though not entirely unexpected, the fanfare that greeted A360 in 2022 was something of note, and no doubt will continue to get bigger as we move into 2023.

Traditionally viewed as the leader in the automation market, UiPath underwent somewhat of a challenging year.

UiPath maintained its place as the front-running market leader according to Gartner’s Magic Quadrant for Robotic Process Automation, however, its stock price has fallen by roughly 75% when compared to this same time last year. After significant growth that also saw a rise in their headcount, there was also a planned reduction in their workforce by about 5% as part of their restructuring plan.

They also appointed a new co-CEO in April of 2022 to help take and keep the RPA heavyweight at the top of the market.

While they still boast a strong platform and technology, albeit one that is expensive and client-side (as the pendulum has swung to favor web-based and cloud-native platforms), the strength and market footprint that UiPath has can never be counted out.

Blue Prism was another RPA leader with a massive customer base that experienced an interesting year. Opening the year with a bidding war between private equity firm Vista and the hedge fund/private equity administrator SS&C Technologies, SS&C eventually won out with a USD 1.65 billion bid.

Blue Prism is another example of a legacy RPA leader with a strong platform, but one that is favored by highly skilled IT folks because of the freedom and flexibility it provides, but not exactly accessible to the average business user because of how technically complex it is.

The challenge organizations want to overcome is scaling automation across the enterprise and empowering citizen developers with the ability to design and deliver automated processes with UI-centric automation.

With SS&C’s acquisition and all indications pointing to significant investments in research and design to enhance the product, 2023 will be an interesting year to see what Blue Prism delivers, however as Automation Anywhere can attest, there is a lot of learning behind upgrading and offering a new platform.

#7 - Automation is Only Getting Bigger

It surely comes as no surprise, but it’s worth noting: automation estates – while they may have moved to new platforms – only got bigger and matured in 2022.

According to Blueprint research, on average, the companies surveyed had 120 automated processes in production. The top 10% of respondents claimed they had over 250 automations running. 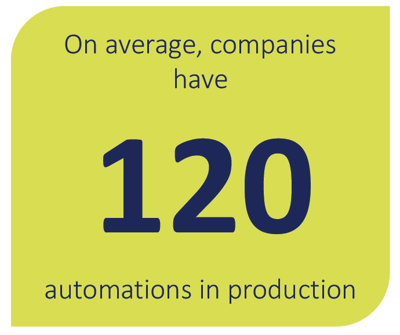 Blueprint’s survey indicated the same growth in terms of investment. 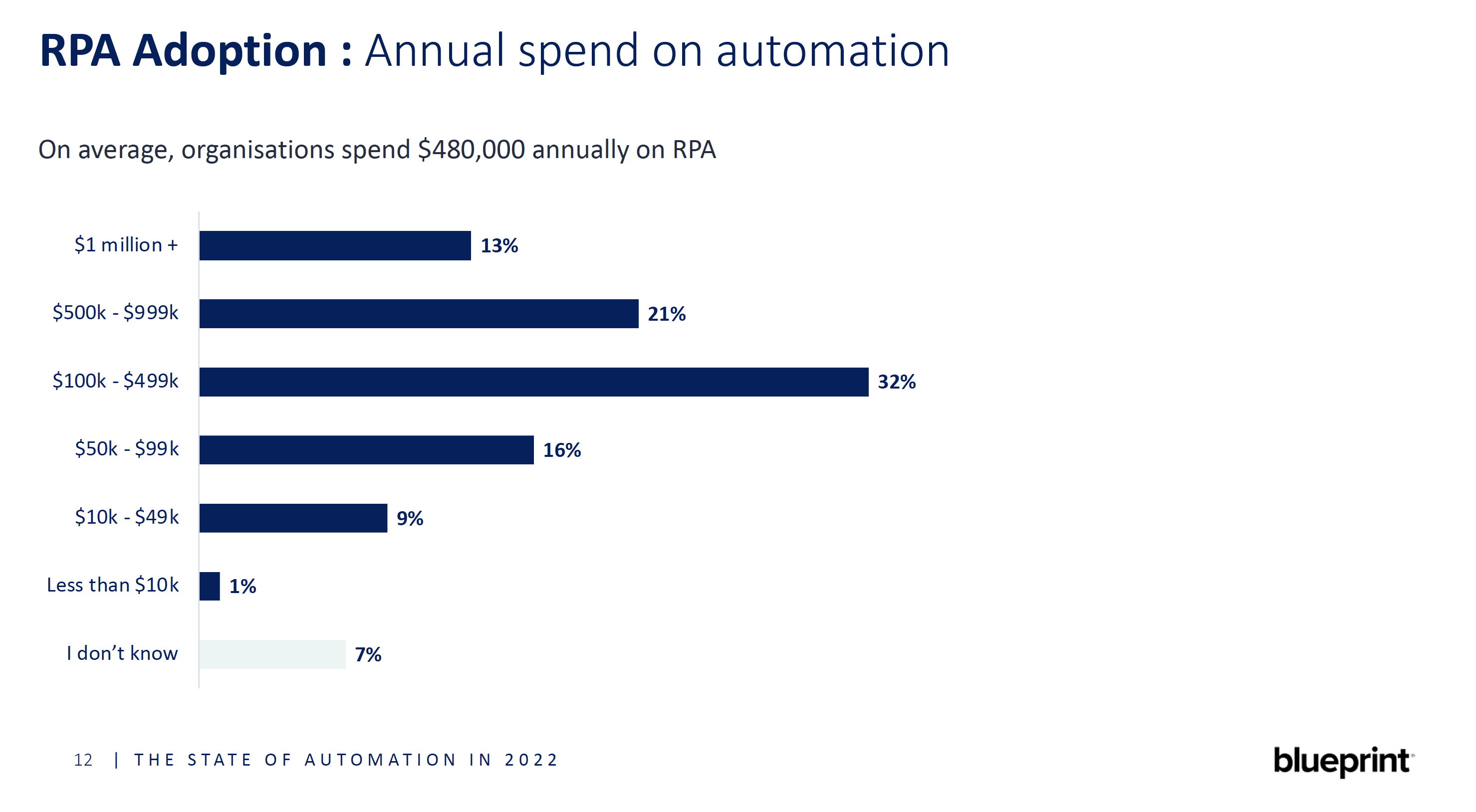 In one study Blueprint published on the State of Automation in 2022, organizations spend an average of $480,000 on automation annually; however, 13% of respondents – most of which represent enterprise organizations with headcounts over 10,000 – reported that they spend over $1 million yearly on automation.

All indications are that even though companies are looking to find more cost-effective RPA platforms like Microsoft Power Automate, investment in automation is only growing.

As for what’s in store for 2023? Watch this space as we’ll be unveiling our predictions for automation in the coming year very soon!