How to Calculate the Cost of Automation Re-platforming

Most organizations started their automation journey on first-generation RPA (robotic process automation) tools. Those tools, and the versions that automation implementations started on, have now become outdated and costly.

The evolving vendor market is causing a lot of organizations to evaluate their options. In some cases, they’re eager to re-platform and re-deploy their entire automation estate onto a new automation platform. In other cases, they want to start developing net-new digital workers on a next-generation platform while maintaining their legacy automations on their original RPA tool.

Regardless, switching automation platforms can feel risky and incredibly expensive without an accurate, tangible method to calculate the cost of switching. In this article, we show you how you can calculate and predict the cost of automation re-platforming depending on the method you choose to switch—manually, or with the help of purpose-built technology.

How Strong is the Desire to Switch Automation Platforms?

In a recent research report on Process Modernization which surveyed 400 high-level automation professionals, 26% of the respondents reported that at least one business unit in their organizations had already switched RPA platforms.

Of the others still on their original platforms, 74% reported that they’re in the process of or considering switching, indicating that the desire and motion to switch automation platforms in the market is very strong.

How Much Does Automation Re-Platforming Cost?

Another question that was asked was how much organizations were spending in re-platforming. 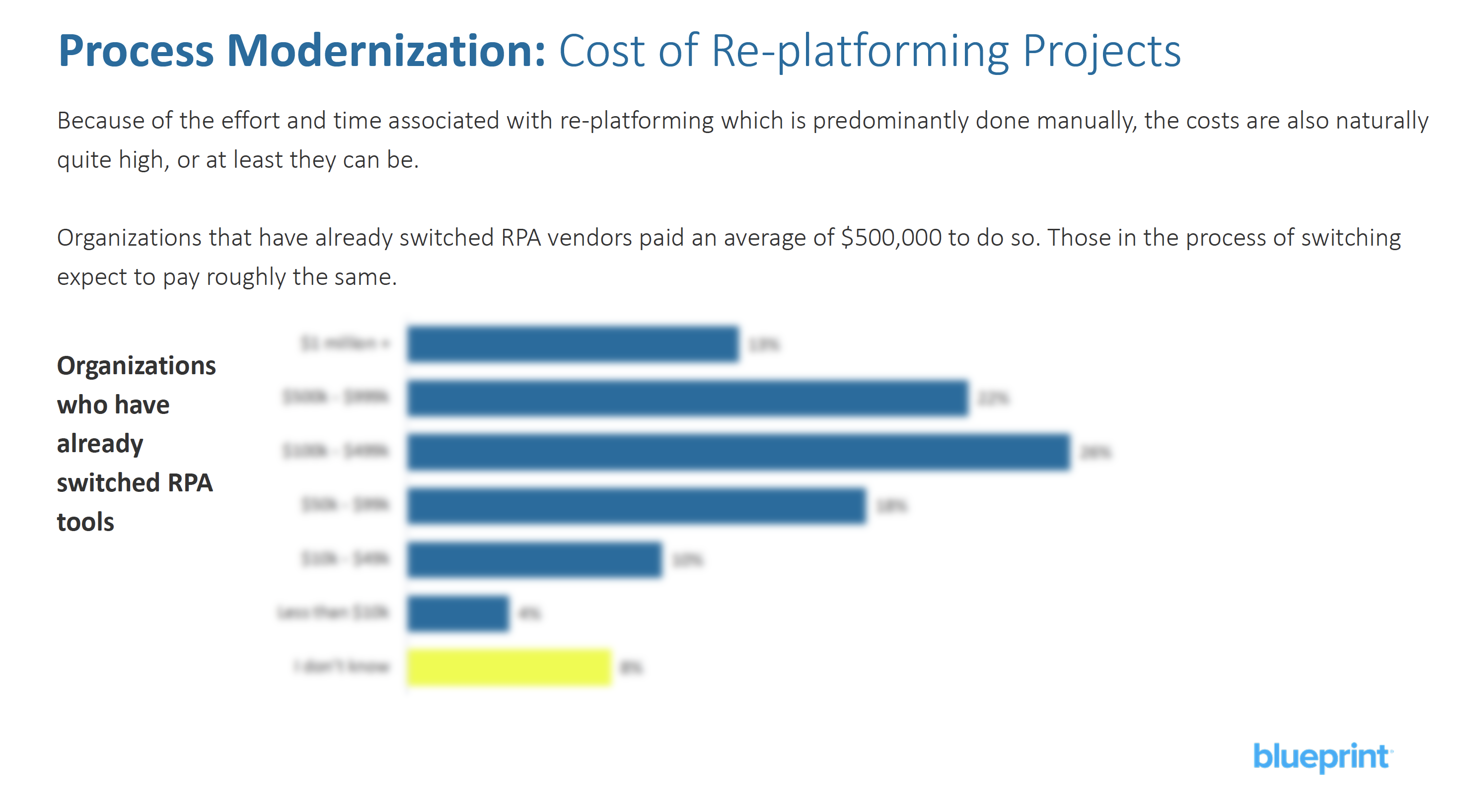 Where are these costs coming from? Well, it really depends on how you re-platform your automation estate.

A lot of organizations re-platform using internal resources or service integrators. At its most basic, re-platforming costs can be estimated using a simple formula.

According to our real-world data, it takes roughly 40 hours to migrate an automation of low complexity. The average, fully burdened rate for a senior RPA developer – which is what’s needed to handle the technical complexity of automation re-platforming – is $109/hour.

Assuming your automation estate only has low-complexity automations (which is almost certainly not the case) a loose estimate for the cost of migrating automations would be:

How to Calculate Automation Re-platforming cost with Blueprint

Blueprint has an automation re-platforming solution that eliminates up to 90% of the manual effort needed to modernize your automation estate onto a new platform.

The technical details of how Blueprint is able to accelerate and reduce the costs of automation re-platforming can be found in Blueprint’s RPA Migration Technical Guide. 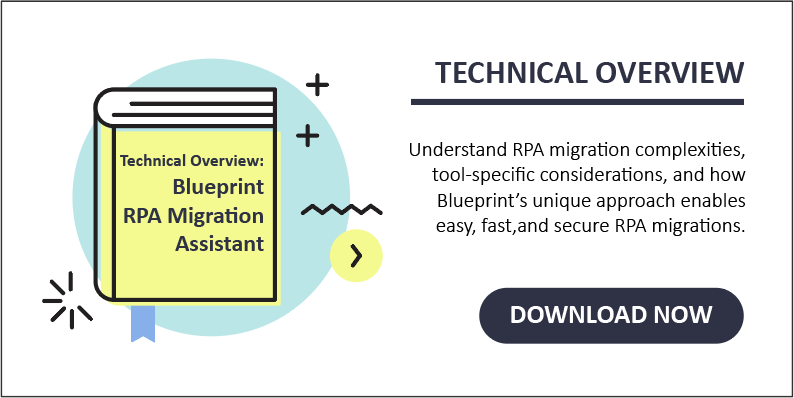 Yet that’s not the only benefit of re-platforming with Blueprint. During the re-platforming effort, Blueprint also centralizes and comprehensively assesses your entire automation estate so you can finally get detailed visibility into what automations you have, the ones that are delivering value, and which are ineffective or costing you money and can be retired.

Not only is Blueprint able to reduce re-platforming costs by 65% while optimizing your entire automation estate, we’re also able to cut re-platforming time by more than half without you ever needing to turn the lights off on your current automation operations.

Want to see exactly how much time and money you can save re-platforming with Blueprint? Then download the Automation Re-Platforming ROI brochure and use the formula inside!