Universal RPA design standards are one way for RPA programs to enable scale and realize the elusive ROI they’re looking for. Even though RPA programs are out of the pilot stage, the road to significant returns and scale has been peppered with growing pains. It seems optimal value capture from automation is no trivial endeavor.

One of the challenges organizations often encounter in their automation efforts is that RPA has proven much more technical than advertised. RPA programs have had to lean hard on IT for implementation and oversight. RPA maintenance and support's rising cost has been another challenge preventing scale and eating away at the expected business value digital workforces were supposed to deliver.

To resolve these issues and enable the returns executive sponsors and RPA programs are striving for, a demand for more cohesion and cooperability in the RPA space is being made. The growing call for a universal set of RPA design standards presents a possible key to unlocking the increased automation ROI and scale RPA programs are looking for. 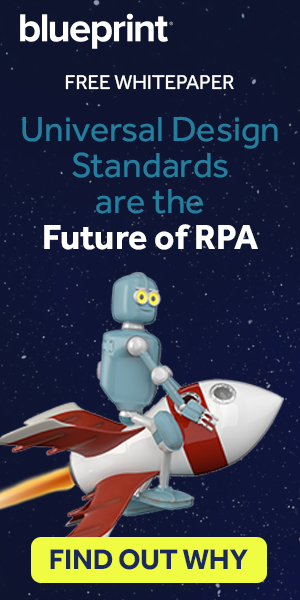 What are Universal RPA Design Standards?

Universal RPA Design Standards is an industry-wide, core structure for automation that would standardize how different RPA tools specify the details of process automations.

As it stands, there is no portability and very little inter-operability in the RPA ecosystem. A bot designed in one RPA platform can’t be exported and run in another. This issue also extends to other solutions across the automation toolchain. For example, a lack of inter-operability and portability as a result of no standards prevents process discovery technology from having the impact many expected. This is because a process captured in most process discovery tools, whether it be a recorder, process mining, or task mining technology, needs to be transcribed and translated into a target RPA tool.

A set of automation standards would produce significant benefits and outcomes that would ultimately enable RPA programs to increase their returns from automation and truly scale RPA across their enterprises.

A set of RPA Design Standards would allow organizations to focus on building more bots to accelerate scale and increase returns instead of dealing with stalled automation pipelines.

A cohesive set of automation standards would remove the need to transcribe processes and tasks captured in process discovery or task mining tools before they’re developed and deployed in the target RPA platforms because, at the moment, the data in one system isn’t compatible and operable in another.

A set of RPA Design Standards would effectively separate automation design and implementation, empowering the citizen developer to be a greater driver of automation across the organization.

With a core structure for automation, users wouldn’t have to understand the unique technical details of any RPA tool. Automated processes could be designed once and run in any RPA platform of your choosing.

One reason switching to another RPA platform is so expensive, time-consuming, and seemingly impossible is because RPA tools have their own ways of detailing process automations—effectively leaving them all speaking different languages.

RPA design standards would eliminate this hurdle and enable RPA programs to switch platforms without having to rebuild each bot from scratch. The entire RPA market would be unlocked, allowing organizations to easily switch to another vendor that delivered greater returns and a reduced time to scale.

Blueprint has already made great leaps to establishing a set of RPA Design Standards to help organizations maximize their ROI and enable scale.

Blueprint has developed a capability to ingest process automations from all leading RPA tools and capture processes from process discovery tools and convert them into a standard format in what we call a Digital Blueprint.

Digital Blueprints are a major step towards a universal set of RPA Design Standards and can reduce migration costs by 80% while accelerating switching times by 3x.

In an upcoming, complementary RPA panel discussion, Blueprint will be hosting leading experts from the RPA space to discuss the future of automation and how RPA design standards fit into that picture to enable the scale and greater returns organizations are searching for.

Save your seat and don’t miss what promises to be a value-filled panel discussion full of ways RPA programs can take their automation to new levels of value capture.