Simplify the Automation Anywhere V11 to A2019 Migration with Blueprint

In 2019, Automation Anywhere released a new version of its leading RPA platform. The new web-based and cloud-native Enterprise A2019 is a significant and exciting upgrade on their legacy, client-based Enterprise V11 setup that brings new functionality and increased benefits. The most crucial of which is that A2019 is a web- and cloud-based platform, reducing the cost of ownership and removing heavy maintenance. There are also significant UX enhancements, support for more operating systems, and more integrations to leverage so you can discover and automate more processes.

Unfortunately, users have encountered challenging migration issues that have discouraged them from moving over to the more modern and beneficial platform.

The Problems with Migrating from Automation Anywhere V11 to A2019

The issues many users have faced when migrating bots from Automation Anywhere V11 to A2019 include:

There are many commands, variables, and activities from V11 that are incomplete, different, or simply not supported in A2019. The result is that bots time out during the bot migration process or simply fail where parity is non-existent between the two different versions.

When bots move from one Automation Anywhere version to the other, the system credentials associated with that bot aren't passed on, creating a heavy user management effort to remedy this issue.

Due to changes in how audit logs are stored, it's much harder to access audit log information when it's needed.

There is no effective and straightforward way to run output compares of bots migrated between the two Automation Anywhere versions, making it exceedingly difficult to test the completeness and quality of bots after migration. 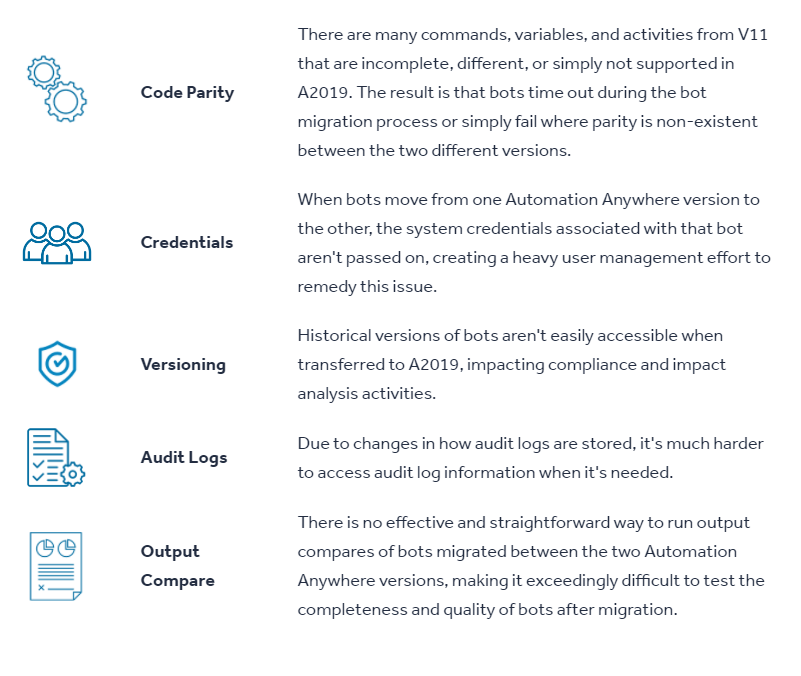 "Moving from one version to another version, it's very difficult because most of the features stop working. For example, there's a system variable known as the Excel Cell Row. It gives you the current row of the inner loop. When going from version v11 to A2019, this variable was suddenly not supported, and most of our bots were dependent on that. Everything went down, and we had to start from scratch."

- Deepinka Singh, Developer at an Enterprise Manufacturing Company on the Challenges of Migrating Between Automation Anywhere versions

The benefits of upgrading to Automation Anywhere A2019 are significant. Still, with all the inherent migration issues and challenges, customers have been discouraged from or unable to migrate their portfolio of bots to the newer platform.

The ideal solution would be to make migrations quick, easy, and pain-free. You would be able to ensure bot availability and RPA uptime is performing at its peak, ensuring you can get back to building out your best-in-class automation strategy.

Blueprint is a trusted Automation Anywhere technology partner and has developed a seamless, end-to-end migration process that can be executed with unparalleled ease while adding value to your bot architecture.

Blueprint's Enterprise Automation Suite can ingest bots from any major RPA vendor and produce an upgraded automated process that is compatible with and can be automatically pushed into any of the major RPA tools.

This upgraded process not only allows you to build a better bot architecture, but you also have the opportunity to optimize processes before you push your automation back into production, improving your overall bot ecosystem. With each upgraded process comes a Digital Blueprint tethered to that process, so you're also able to consolidate all automations in one place for complete control and visibility. 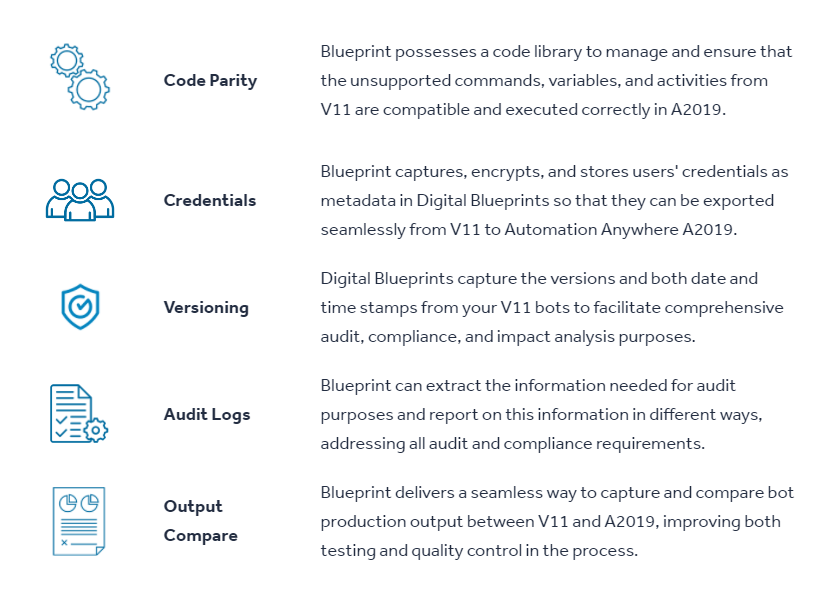 For more information on how you can painlessly migrate your inventory of digital workers between RPA platforms while simultaneously improving your overall bot architecture to drive significant business value, watch the on-demand webinar.

You can also get in touch with one of our experts today for more information.

Experience the next generation of RPA at scale and accelerate your time to value, today.