The Challenges in Switching RPA Tools and How to Overcome Them

Despite the obvious value that can be gained from Robotic Process Automation (RPA), there is a growing interest across the automation space to switch RPA tools. Many RPA vendors have oversold their ease of implementation and ability to capture value in the market. This is the primary driver of a large number of competitive account transitions in 2021 and beyond as companies abandon their RPA vendor for an alternative.

The motivation to migrate is simple: organizations want to realize the benefits and returns they were promised by vendors but haven't yet achieved in their RPA implementations.

Despite the ample motivation, there haven't been many large-scale RPA tool transitions to date because the cost of switching RPA tools has been too great, even though the reasons to consider a move are mounting and gaining steam.

There are several critical reasons organizations are looking to migrate their bot portfolios to another platform:

Organizations have been unable to scale automation across the enterprise or realize the ROI they were promised because of crippling RPA maintenance and support issues. Companies have painfully discovered that automation isn't as easy as they were told, leaving them wondering if they picked the wrong RPA tool and are better off trying another.

RPA vendors have over-promised and under-delivered on the ease of RPA implementation. The illusion that Citizen Developers could drive automation never materialized. Now, organizations want to try their luck with a different approach and a new RPA provider.

Learn More: Why RPA Tools Were Never Able to Empower the Citizen Developer

Some organizations have inadvertently set up disconnected, independent automation initiatives within different business lines, also known as islands of automation. The consequences include a lack of quality, disparate automation design practices, and inflated costs by procuring multiple RPA tools. This isn't a case for switching RPA vendors, but rather, employing the best practice and cost-saving measure of consolidating all automations in a singular platform.

A large segment of Automation Anywhere customers are using V11 of the platform and have struggled to upgrade to the newer A2019 version. With the end of maintenance for V11 right around the corner, customers wishing to upgrade have been forced to rebuild bots from scratch in the A2019 platform or look elsewhere for help.

The Historical Challenges of Switching RPA Tools and Vendors

Historically, the burden of switching RPA providers has simply been too high and complicated by the following issues:

The sum of these challenges means that changing RPA vendors requires entire bot portfolios to be rebuilt from scratch. The manual effort and operational cost alone is enough to deter organizations from attempting a switch. Automation programs are essentially locked into whichever RPA vendor they initially chose, whether they're satisfied or not.

Historically, that was the case, but it no longer has to be.

Blueprint delivers a seamless, end-to-end migration process between all leading RPA tools that removes all the friction from migrating while adding significant value to your bot architecture. From a speed and cost perspective, switching RPA platforms with Blueprint is win-win: costs are reduced by 75%, and the migration process is completed 3x faster.

Blueprint's Enterprise Automation Suite ingests bots from the leading RPA tools and reverse-engineers them into our platform to create an upgraded automated process in the form of a Digital Blueprint.

Digital Blueprints can then be further optimized, if needed, before being automatically pushed into any other leading RPA platform that you want to migrate to. This significantly simplifies bot migration while also providing an opportunity to improve your entire bot ecosystem in the process. 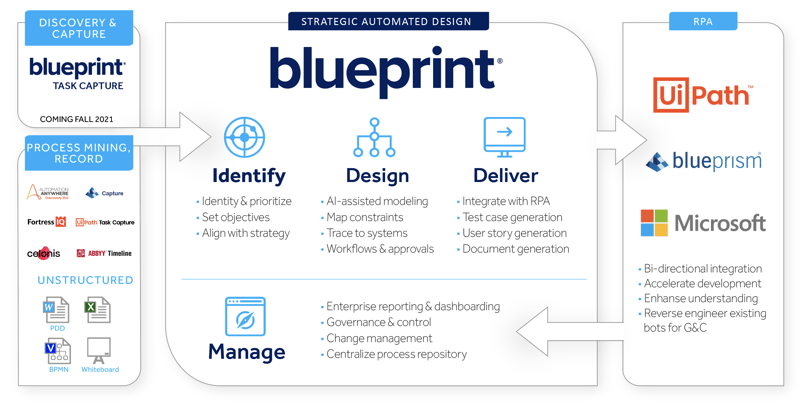 With every Digital Blueprint, your automated process can be connected to all relevant dependencies, systems, and constraints, facilitating better RPA change management and risk analysis to maximize RPA uptime for higher returns.

Digital Blueprints can also identify errors, issues, and exceptions during the migration process. In many cases, Blueprint can automatically fix issues like a lack of code parity, lost credentials, missing versioning and audit logs, and unavailable output compare that forced organizations to have to rebuild their entire digital workforce if they wanted to make a switch to another RPA vendor in the past.

Join us on Tuesday, December 7th where a live panel of automation experts will discuss RPA platform migration in detail, including:

Save your seat and discover expert insights into the future of the RPA market and how migrating automation programs can enable scale. 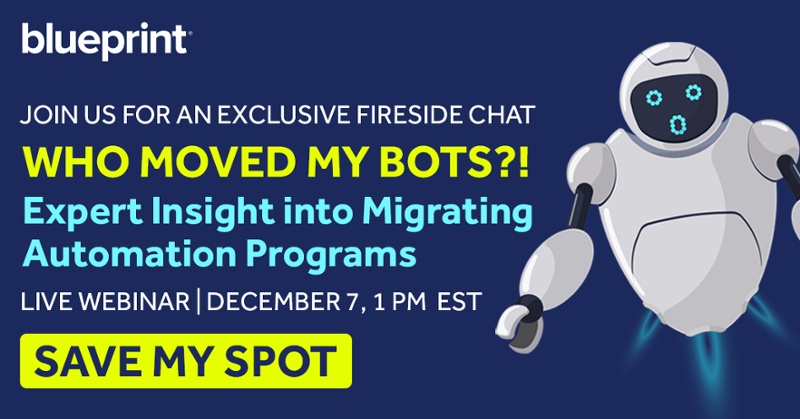